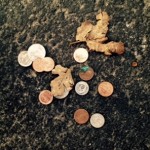 “Pennies from Heaven”, a phrase that is seldom used, even as a cliché, but had meaning back in the mid 1930’s because of the popular Frank Sinatra song.  My parent’s generation using this term when they received a small unexpected gift that brought them pleasure.  “Thanks, it’s like receiving pennies from heaven.”

About a year ago, while walking from the parking lot to the grocery story, I occasionally noticed an accidentally dropped coin.  Being a bit superstitious, I looked to see if it was head’s or tail’s up.  Sometimes I cared, but often picked it up.

As the months went by, my search for coins became a game.  It didn’t always find one, but I was always amused when I did.  I might put it in the coin holder on the dash of my car, and other times I’d drop it into a small slot in my handbag.

A week or so ago, I was walking back to my car and glanced around for abandoned coins.  It’s been awhile since I’d found one, so when I didn’t I felt a bit neglected.  I’d come to anticipate finding them more than I realized.

Because I’d had so much fun with this little game, I decided that instead of looking for coins in parking lots, I’d leave them.  It’s like paying back, and then forward.  Since I often find myself in parking lots, I often grab a coin to leave behind.  Sometime it’s a penny, maybe a nickel, dime, or even a quarter.  I don’t give thought to the denomination, but I do wonder who finds them, and if it makes them smile.

Early last week I stopped by a music store on 4th Street in Santa Rosa.  I’d decided it was time to retrieve a guitar that I’d dropped off over 8 months earlier, repaired or not.   When I walked in, I headed for the repair department.  I told the fellow behind the desk asked my name, and what instrument I had left.  I told him a Framus guitar.  Turning to his right, he looked over his shoulder, and said “I think that’s your guitar, and I believe it’s ready to go. I’ll check with Steve.”

I was stunned.  This wasn’t what I’d expected to hear.  Ten minutes later, Steve looked toward the chair I’d found, and with a huge smile said “hey, I’m so glad to see you.  I just have to remove the clamps and put on a new set of strings.  Your guitar will be ready to go in no time.”  What were the odds, after 8 months of waiting, that it would be ready that precise day?  Not only did he not charge me for the repairs, or a new set of strings, but he asked a clerk to prepare a $50.00 gift certificate for the most patient customer he’d ever had.  I walked away that day feeling like I’d been showered with pennies!

The next morning I went for an eye exam, had breakfast at a local diner, and did a few errands.  When I looked at my watch I decided I had time to make it to the matinee showing of “American Sniper.”   I arrived home about 4:00.  I checked my cell phone for messages and found an email from my web site consultant.  “Can you call me at 3:00?  I have something I want to discuss with you.”  That time had passed, but I sent her an email saying “I’m available, and will be home the rest of the day.”

About forty minutes later she called.  After a few pleasantries she asked me if I was working yet.

She said “Great! How would you like to work with me on some web related things?  This really took me off guard.

“Well, I love to write, and I would really enjoy creating web content.”

She said “Perfect, I just gained 4 new clients, and really need help.  You’re sort of a creative geek, and that’s exactly what I need.”

Talk about another ‘out of nowhere’ coincidence.  I’d been looking for work, but hadn’t found an engaging opportunity. Diana and I enjoy each other, and that’s a huge plus.  I couldn’t be more excited!

A few days later I had dinner with a couple of friends I used to work with.  We had so much to talk about I’s forgotten to mention the new work I’d been offered.  When I gave them a brief description of the job, the gals were thrilled and wished me their best.

Earlier that evening, while leaving the car to walk to the restaurant, I had retrieved a couple of coins from my dashboard holder and dropped them outside of the car.   As my friends and I were leaving the restaurant I told them about the fortunate occurrences that I’d experience the past couple of days.  I mentioned the coins that I’d found in parking lots, and decided to return the gestures by leaving some instead of looking for them.

We all puzzled about this for a moment, and they agreed that the timing was quite intriguing, and maybe there is a connection.  They could use a little treasure from heaven once in awhile too, and thought they might try the coin theory.

I haven’t really drawn the conclusion that these two unexpected experiences are associated with my little game of leaving coins in parking lots.  I simply enjoy giving back something that had given me pleasure.  Maybe there is a connection, but I will continue to leave coins with a great sense of abandon in hopes that they might brighten someone’s day. 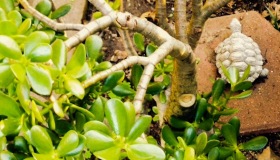 Pennys from Heaven…I remember the song. Five little pennys…this little penny….I am going to look up the song…thanks for the “Penny for your toughts”!!

Thanks Megan!! Glad you enjoyed my story!!

Sharioooh,
Looking for pennies in a parking lot and checking if they are heads or tails? I sense a betting man would do that…Oh well, l love picking coins up–my excuse is exercise! It’s good to bend– a little flex here and there can’t hurt anybody.

I used to check to see what side of the coin is “up”, but gave that up thinking it’s a coin, and it has value either way. I find it to be a fun exercise too, but for a different reason. It really does seem to bring me good fortune too, and that’s a side benefit I just didn’t give any thought to.
Thanks for your comment!!