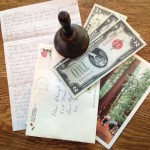 And the mystery unfolds….

The woman my father decided to marry turned out to be perpetually miserable, and the “how-to-love” gene was obviously missing.  She used her feminine wiles to trick people into thinking she was genuine.  She postured piety at church, and feigned delight at friends’ bridge parties. Only her family knew the darkness that lay beneath the surface of her fabricated ‘Mona Lisa’ smile.

Mom’s coldness was only trumped by her obsessive thriftiness.  She had a deeply rooted belief that every copper penny had power.  Having been raised on a small farm in Iowa during the Great Depression, luxuries weren’t to be had.  Supplies were rationed.  They had what food they could grow, and milk from their cow, but life felt undignified.  Mom never forgot the regret of poverty as a child; the longing to be looked upon in the glowing light that reflects financial abundance.

Our family wasn’t poor, we were average.  Mom and dad built our home, and we lived, what outsiders would consider, a respectable life.

When I’d arrive home after school, Mom would be hovering over the stove, boiling potatoes while meat roasted in the oven.  Or more often than not, I’d find her on the couch, her ledger and pencil in hand.  Her mind was deeply engaged in scrutinizing the budget.  I would tense, wondering if my 25 cent allowance was in jeopardy.

I pleaded with Mom, several times, to join Brownies.  My friends went to the meetings after school.  I loved the outfits they wore, and their adventures in nature sounded so freeing.  When I brought it up Mom’s face would stiffen, and her eyes became cold as ice.  “We have no money for such frivolous things.  It’s a total waste of your time.”

When I’d begun to blossom into a teen, I was in need of a new bathing suit. I brought it up before dinner one evening, and the conversation was completely dismissed with “I’ll give it some thought, but for now, set the table.”

Several days later Mom presented me with a brown one-piece that her friend’s daughter had outgrown.  “I want you to try this on. If it fits we can see how much Joan is asking.”  I tried it on, it fit, and Mom begrudgingly paid for it.  It wasn’t ugly, but it was second-hand, and made me feel ashamed.

Her tastes were beyond her means. I guess mine were too.  Her desires weren’t totally exceptional; she had aspirations which weren’t uncommon after the war.  What wasn’t justifiable, at least in my mind, was her erratic and abrasive temperament.  Her tantrums were not only emotionally abusive; she frequently struck my brother on the back of his hands when he made a mistake practicing the piano.  How she could know when he made a mistake was puzzling as she’d never struck her fingers to a piano key.

Her rage was apparent in so many ways we all became weary of coming home.  Dad was often told of a mishap my brother or I had at school, and was directed to take us to the basement.  Although he realized it was abusive, he somehow followed through.  I’m sure it hurt for him to comply with punishment based on something he hadn’t witnessed.  He knew her wrath would be transferred to him if he disregarded it.

One day Grandpa had plowed the fields, leaving deep crevices in the ground that Betts couldn’t see.  Mom road through them at her normal pace, but the horse stumbled in one of the ruts, throwing Mom headfirst into the dirt.  When Grandpa found her, she was laying on her back, her arms behind her head.  He noticed a strained look on her face when lifted her off the ground.  Nothing seemed broken. She walked Old Betts back to the barn and life resumed.

Gram told me that she was different after the fall, distant and curt.  Mom had complained of a nagging headache, but poor farmers didn’t rush off to the doctor, they toughed it out.  Could that fall have damaged Mom? Gram came to believe that what happened that day contributed to her need to lash out at those closest to her.  The look on Gram’s face, as she told the story, made me think that she realized, way too late, that Mom may have needed medical attention that wasn’t provided.  Her eyes saddened, and quiet filled the room.

On occasion, the opportunity for me to ride a horse presented itself. Mom made it uncompromisingly clear that I wasn’t allowed.  At the time I failed to recognize that she thought I might get hurt.   Maybe what happened to her would happen to me.  Perhaps she was right, but I would never know as I kept my distance.

Although Mom’s behavior had become quite predictable over the years, every now and then she would shake up my world with something very out of character.  For a brief moment, it seemed that a trace of love could surface.  When I was about 49, I received a letter from Mom. This wasn’t a customary practice, especially after she, Dad, and Gram moved from Iowa to California.  There wasn’t a need to write.  They lived about fifteen minutes away.

I recently discovered the letter as I was going through my china cabinet.  Although I’d read it years ago I hadn’t given it much thought, but this time I was acutely aware that several things were somewhat amusing, yet poignant.

The envelope was addressed to Mrs. Sheryl Adams.  After my divorced, in the early 70’s, I hadn’t been an authentic “Mrs.” for about seventeen years, but it was a formality that she seemed attached to.  No one in my family used my given name, Sheryl, since the day I was born, unless I was being chastised for what was perceived as a serious misdeed.  Shari, which I was commonly called, must not have come to mind when discipline was called for.

The image on the enclosed card depicted a stand of redwoods and a well trodden path in Muir Woods National Monument. The image held no particular meaning for Mom. The card was printed exclusively for the Marin Independent Journal newspaper, and I’d concluded that the free card had been tucked into the newspaper prior to delivery.

Accompanying the card lay a couple of crisp two dollar bills, and a not so crisp five, accompanied by a folded letter. I set the card and the money aside as I unfolded the note.

Grandma had a special poem that she treasured, and the little bell that she put with it. I don’t remember the complete poem, but the two lines that I do remember I will never forget.  ‘A bell is not a bell until you ring it – and love is not love until you give it away!’

I was very fortunate to win $78 because I had 4 of 6 numbers in Saturday night’s lotto drawing. I had the joy of winning it, and I reflected on Gram’s poem.  This brought me to the thought of sharing it with my very dear son and daughter who are just special to me.

I hope fate will be so kind that it will someday be 6 of the 6 numbers, but that may be wishful thinking.  To get 4 out of 6 made me very happy.

The letter gave me pause.  Kindness of this sort was so uncharacteristic.  Mom still didn’t share money indiscriminately.  It was as if she’d made a pact with herself to protect it at all cost.  Oddly enough, the two things that she did indulge in were playing the slots in Reno when we made the bi-annual trek there, and religiously buying weekly lotto tickets. They both presented potential consequences of her losing her most prized possession, but she justified them by indulging her fantasy of winning big.

When I read the letter, I could envision her excitement. It touched on the fulfillment of her dream.  With the thought of Gram’s poem in mind, she wanted to share the joy of winning with her kids.

It was one of the few times in my life that I experienced Mom expressing her feelings in a tender and loving way.

When she passed away, my brother and I went through her belongings.  I stumbled upon a small, very tarnished bell, with a damaged wooden handle.  I knew immediately it was the bell that she had referred to in her letter, but had never shared with us.  I immediately stowed it in my purse.

I brought the bell home and put it in the china cabinet on top of Mom’s letter.  It was as if the story was finally complete.

Memories of Mom still haunt me, and her life remains a puzzle with missing pieces.  Yes, her bell did toll, broadcasting a tinkle of sweetness, but the sadness and remorse of my stolen childhood lingers.